A Common Question From Parents, Teachers and Students

Over the years, there have been many discussions in education, with policymakers taking part, about school start times and the importance of students getting enough sleep.

After looking at the results of scientific studies, and researching the opinions of several professionals, we can say with confidence: Yes. There are many benefits of starting school later; especially for middle school and high school students.

We will take a look at many good reasons why schools should start later, for the benefit of students and society as a whole. We also tried to figure out why schools start so early, which we will touch on at the end. 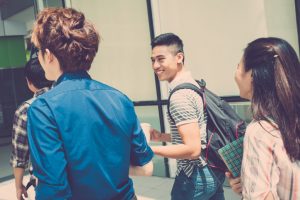 The Rational Argument For A Late Start

Medical professionals, middle and high school teachers, and other student advocates have long argued that school start times are simply too early. Around 80% of schools start before 8a.m., which means many students windup sleep-deprived. There is a natural biological tendency for teens to stay up late and want to sleep in. Physicians recommend teens get at least 8.5 to 9.5 hours of sleep per night. Those who don’t face a number of health risks that can have serious consequences on their mental and physical well-being.

Let’s look at the mental consequences of early start times that show why schools should start later. As far back as 1999, a member of Congress introduced a resolution to make school start times later. Addressing the resolution, Representative Zoe Lofgren said, “Over time, sleep deprivation leads to serious consequences for academic achievement, social behavior, and the health and safety of our nation’s youth.”

Many opponents, such as physical education teachers, cite after school extracurricular activities as one of the reasons why schools should start before 8:30. Sure, later starts might cut in to some practice time. But that could wind up saving students a lot of unnecessary pain and suffering.

Research has even shown that students who get less than 8 hours sleep at night were two-thirds likely to get injured than those who do. What’s more, 20%+ of these injuries required a trip to the emergency room. Think about it, if you get more sleep you won’t be as drowsy, clumsy, and probably have better reflexes, balance and hand-eye coordination – all things that can impact your performance in a sport.

You could pretty easily make the argument that early starts should actually be a concern for any parent with a child in sports.

The Case Continues…Even When Kids Aren’t At School

It’s not just when students are at school that drowsiness can be an issue. What about driving to and from school? With teens being at the root of half of all traffic accidents, it can be safely said that those who get more sleep can be more trusted behind the wheel.

Studies have also linked students who don’t get enough sleep to drug and alcohol abuse, and higher suicide rates. You can see how sleep can greatly alter your life path. These are awesome benefits of starting school later.

So, Then…Why Do We Send The Kids To School So Early?

The case for why schools start so early doesn’t always make sense to us. Many believe that the cost of disrupting the current way things work would be expensive and cause confusion.

It is also simply harder to get people and systems to change; especially when people are used to things working one way.

But these naysayers might also want to think again, especially if they are budget-conscious. Since school attendance and federal dollars are directly tied together, it’s in the school’s best interest to keep attendance up. Later start times increased attendance 15% at a district in Ohio. Meanwhile, in Los Angeles they estimate increasing attendance just 1% would net around $40 million.

What About Academic Performance? Does Start Time Affect It?

Test scores and measureable results are such an important component of gauging education, we have to discuss the impact on academic performance. Studies have proven that when students get more sleep, their test scores actually go up.

Even better, the lowest performing students made the biggest progress in their learning development when they had adequate sleep.

To us, these are some of the best reasons why schools should start later.

Even the Center for Disease Control (CDC) put out a statement saying directly that middle school students start school too early. They state definitively that no school should start earlier than 8:30 to give students a chance to learn at their maximum capabilities.

Now that we know the benefits of starting school later, what can we do to help our kids get more sleep? It’s a little complicated, actually. Since school districts operate at the local level, in many ways, it’s hard to convince everyone why schools should start later. Just to show you the range, the CDC reported that Louisiana had an average start time of 7:40am, which was the earliest in the nation. On the other hand, Alaska clocked in as the latest starting state at 8:33 as its average start time.

If you want to make an impact, take this information to your next school board meeting, or better yet…run for your local school board and take steps to augment your school district’s start time!

Let us know how it goes!